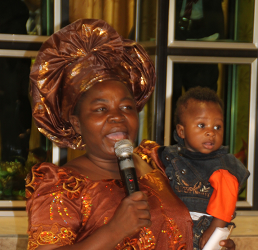 “God is our refuge and strength, a very present help in trouble.” Psalm 46: 1

Mrs. Glory Paul from Okwukwendi Parish of the Watchman Catholic Charismatic Renewal Movement, Aba Diocese, wanted to have another baby, but her expectations were not gratified. She, however, continued to believe God for a miracle. After seven years, God visited her following her participation in the 2011 WCCRM International Leadership Conference at LOGISS, Awo Omamma, where the man of God, the General Superintendent, held a session for couples and also prayed for them. Today, she has a lovely baby for which she is so grateful to God. Her testimony:

“I AM here to testify about the gift God gave me at the 2011 WCRRM Ministers’ Conference. If you look at my hand, you will see the precious gift God gave me at the conference which physically manifested in 2012. Of a truth, concerning this gift, I prayed a lot and also took several medications. I visited several hospitals, took both herbal and conventional drugs, but all to no avail. But I am glad that after seven years, when these human efforts failed to yield any result, God gave me the gift. Yes, I had a baby seven years ago and soon I began to pray to God to add another one to me. As we went to the Ministers’ Conference in 2010, I prayed and decreed that as I returned for the 2011 conference, that it would either be that I would be nursing a baby or pregnant. But as we went for the conference in 2011, I was neither pregnant nor nursing a baby, but I was not preoccupied with that. However, as soon as I stepped into the Rock Chapel at LOGISS, the venue of the conference, I heard a voice say to me: Where is the child or the pregnancy? I almost went out of my mind but I held myself and continued praying. After some days, I was in a trance where I saw a basket of ripe fruits. As they were being shared, I got my own portion and when the revelation was over, it occurred to me that fruits represent children. The conference lasted for a week. On the closing day, the General Superintendent asked to have a meeting with married people where he talked, among other things, about people expecting the fruit of the womb and those that had but wanted more. At the end, he prayed for all of us. I returned from the conference believing that it had happened. In fact I went ahead to testify in my parish. But when after sometime nothing happened, I began to wonder whether it was right for me to have shared the testimony. But it was not long, specifically, in September, it happened! It was like a film. That was how God did it. If you look at the fruit I am carrying here now, you will agree with me that it is a very good one. God who did this for me will also visit everyone else looking up to Him for a similar miracle. Praise the Lord!”