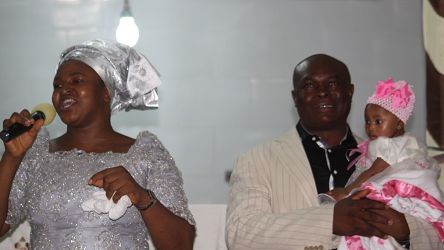 “The Lord on high is mightier than the noise of many waters, than the mighty waves of the sea. Your testimonies are very sure; Holiness adorns Your house, O Lord, forever.” Psalm 93:4-5

Mrs. Ijeoma Nwike of the Watchman Catholic Charismatic Renewal Movement, Satellite Parish, Lagos, had expected to carry her own babies shortly after their wedding in 2004. But she experienced a delay, and this, according to her, affected her relationship with God, and so, the situation lingered. But through the prayers, care and understanding she received from her pastors, God restored her and blessed her with a lovely daughter. Few months ago, the happy parents, Gibson and Ijeoma Nwike, invited friends and relations to a special Thanksgiving service where Mrs. Nwike shared her testimony: