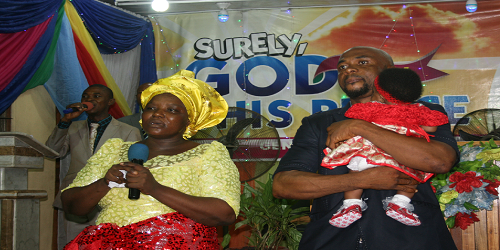 “O give thanks unto the LORD; call upon His name: make known His deeds among the people”  – Psalm 105:1

The testimony of Mrs. Uju Nnabugwu of Orile-Doyin Parish of the Watchman Catholic Charismatic Movement, Lagos, serves to underline the Biblical declaration that with God all things are possible. A serious health problem had brought her and her family to the Watchman. After being ministered to, the sickness was knocked out. But there was another problem. After their first child, no further conception could take place. But soon, God broke this ten-year old delay and she conceived again. Her testimony:

“PRAISE the Lord! I am here to testify to the goodness and mercy of the Lord in my life and family.
First, I want to thank God because He has kept my family in good health. Also, I thank God for His healing and deliverance upon me. I came to this Doyin Parish of the Watchman in April 2011 with a terrible sickness that could not be diagnosed and, therefore, could not be treated. I visited various hospitals and churches until I met a sister who encouraged me to visit this Church (the Watchman) which I did.
At the close of the church service that day, all the new comers were asked to wait and see the pastor. I obeyed and waited and when it was my turn to see him, I narrated my story to him and he prayed for me. He then directed me to another pastor in the church who was to conduct deliverance on me. That pastor recommended a 3-day fasting programme for me. When I was through with it, he conducted the deliverance and I began to regain my health progressively. In no time, I became free completely from whatever was disturbing my health and without much ado, I became a member of the Church.
To cap it all, I want to thank God for breaking a 10-year yoke of delay in child-bearing. I gave birth to my first child in 2005. After the period of weaning, I was hoping to have another conception but to our greatest surprise, it was not forthcoming and we were counting as the years rolled by. My husband and I visited so many hospitals and were subjected to all kinds of tests and treatments but all to no avail. A lot of money was spent in our quest to have another conception but all went down the drain. At the end, we decided to stick to our only son and forget about looking for human assistance of any kind but hope on God. Along the line, we joined the Watchman and the Church staged a programme tagged, ‘No More Barrenness In The Watchman’ (A September to Remember). It was an ember month programme. In the course of the event, I reminded God of His promises as contained in Psalm 127:3 and confessed positively everyday and night, telling myself that I must carry my baby during these ember months.
During this time, too, I went from time to time to see the pastor for prayers and counselling. At a time, he invited my husband and me to his office. He encouraged us to have faith in God that God would visit us very soon and that we should consider what we were asking from God as granted. I began then to buy baby wears and even wore maternity gown in anticipation. I made a vow and promised to fulfill it when God blesses me with a baby. I also pledged to testify to the glory of His name. And then it happened! Oh, praise the Lord! God took me unawares. It was during my monthly period. On the second day, it suddenly ceased and I began to wonder what was going on. I was observing myself very closely until I went for a test where it was confirmed that I was indeed pregnant. I broke the news to my husband and we were all very excited. It progressed and took its full course until the day I put to bed.
I am very grateful to the Immirimious God of the Watchman who has blessed me again after ten years with the precious gift of the womb and whose name we gave as Ewezugachi Peculiar Nnabugwu. I thank my pastors as well for their unflinching support and encouragement during the waiting period. They have been very wonderful and may God bless them with more anointing. My prayers also go for those families that are yet to be blessed with the fruit of the womb that their own blessing would soon come to them. My counsel to them is that they should keep hope alive and have faith in God who would at His own time grant them their hearts’ desire. Praise the Lord!”