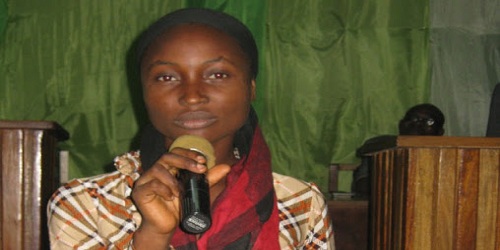 “For the weapons of our warfare are not carnal, but mighty through God to the pulling down of strongholds“ 2 Corinthians 10: 4.

WATCHMEN, praise the Lord! My name is Grace Ohiri and I worship at Bariga Parish of the Watchman Catholic Charismatic Renewal Movement, Lagos. I want to thank God for delivering me from the hands of some ritual killers.

On that fateful day, August 21, 2010, I was returning home from a business seminar I had attended. I boarded a commercial bus from Ikeja hoping to come down at Palmgrove.

While the journey progressed, we encountered a traffic build-up as a result of an accident that had occurred along the way and so the driver diverted and followed another route to escape the hold-up. Or so we thought.

There was calm as the journey progressed until we noticed a signpost indicating the way to Sagamu and that gave rise to strong protests by the passengers who began to shout and scream. The driver shouted at us and asked everyone to keep quiet that we would soon get to our destinations.

I had a ministration immediately that we were in danger so I started praying. My fear was confirmed when I saw the conductor spraying some powdery substance on us. By this time, I was reading the Bible. In no time, all the passengers, except me, fell asleep.

When the driver looked back and saw that I was still conscious and alert, he asked the conductor why I was not affected by the spell. The conductor looked at me and snatched the Bible from me. I started singing aloud and after a while, the other passengers who had slept off began to regain consciousness.

Despite our protests by shouting and crying, we were driven into a forest in one of the towns in the outskirts of Lagos and like a sheep about to be slaughtered, we were led to a shrine.

When we got there, we also saw many people, children and adults alike, who had equally fallen victim to these wicked people and were as it were, waiting for the hand of God to deliver and save them.

It was indeed a harrowing experience and as I was praying in my heart for God’s intervention, one fat woman came out and said she could sense a strange spirit among us. She moved round and when she got to me, she asked one of her orderlies to take me away that she did not need me.

The person looked at me and was reluctant to come near me. Now sensing the sudden change in the situation of things, I told them that I would not leave the place unless they also released all the other people in their custody.

My action provoked the woman to anger and she said I was joking and that because of my audacity, she would now slaughter all of us by nightfall.

She started mumbling some words which I suspected were incantation and so I also started my own “incantations” (that is, prayers to God). At a point, she stopped and demanded to know from me what gave me the audacity to challenge her, stressing that I was courting the wrath of her gods.

It was an opportunity that offered itself on a platter of gold so I needed to make the maximum use of it. I told her that I served the God that created all things and that her god was a lesser god that had no power. She got infuriated the more and went into the shrine and reemerged with a stick that was burning with fire and pointed it at me.

Brethren, I marveled at what happened next.  Almost immediately, there was a sound of thunder which struck her, and before our very eyes, she fell down and died instantly. There was sudden commotion and panic, and when her assistants examined her and found out that she was dead, they all took to their heels.

Without wasting time, we ran after them and by the time we all came out from the bush, we found ourselves in Ikorodu.  Jubilating over our regained freedom from the hands of the ritual killers, we got a bus that conveyed us to Palmgrove and it was the subject of discussion throughout the journey.

By the time I got home, it was past 11.00pm and that was how God saved me and the others from what could have been premature death. Praise the Lord!”