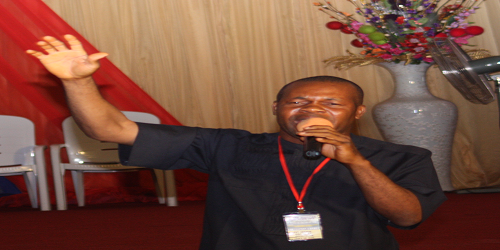 “I will sing of the mercies of the Lord for ever: with my mouth will I make known thy faithfulness to all generations” – Psalm 89:1.

During a recent conference of Watchman Catholic Charismatic Renewal Movement Leaders and Ministers at the Rock Chapel, LOGISS, Awo Omamma, Imo State, God visited Malachy Okezue from Nnewi in Onitsha Diocese, and knocked out a disease that had troubled and humiliated him for several years. Quite early in life, he noticed that he had begun to urinate more frequently. Later it became clear that he had become diabetic as his blood sugar level rose beyond what was normal and healthy; and this persisted for several years. In the course of the Ministers’ Conference, the man of God, the WCCRM General Superintendent, while ministering, called out and prayed for those suffering from diabetes. Testifying later, Okezue said that when he noticed that he had been healed, he rejoiced and jubilated like the Biblical David. And later, he came out happily to share the testimony of his great deliverance:

“I AM here to share the testimony of what God did for me in the course of this programme. Brethren, if you know any person suffering from diabetes, you should, please, pity the person. Diabetes does not have respect for anybody, whether the person is young or old. It is the kind of sickness that can embarrass one any time and anywhere.
At a certain stage in my life, I noticed the symptoms of diabetes which started disturbing me quite early in life. When I was growing up, I observed that even when my mates had stopped bed-wetting, I, unfortunately, noticed that any time I woke up from sleep, the cloth I wore and the bed I lay on would be wet, and I would express self pity. Sometimes I would cry. This continued till when I went to serve as an apprentice under somebody. I was there with some other young apprentices and this nasty experience continued to trouble me. Each time it happened, I would cry and lament. This experience continued until I was settled by my master. Sometimes, while at the shop in the market, I would be pressed, but before I could get to a convenient place to urinate, the thing would have messed itself (not me) up.
This remained an embarrassing experience of my life till I got married and had children. Each time I retired for the night and slept, I would rise to go to pass urine for about seven or eight times before daybreak. Whenever I travelled and there was no restroom I could readily find nearby, I would look for an empty plastic water container into which I would pass urine, otherwise, something embarrassing would happen. It had been a secret that I kept to myself. I had been going through this affliction until December last year. Doctors had attended to me and counselled that I should avoid starchy food (carbohydrates) which I adhered to religiously. Though it helped for a while, the problem did not stop. Even though I told my wife what I was passing through, I didn’t go into details. Sometimes, while walking on the road, I would start staggering as if I would fall down. At that point, I was battling with it, trying to suppress it. The only time I usually got some relief was when I was on the pulpit ministering. It would be hard to believe again that I had such a problem each time I was ministering. No doubt, the Spirit of God always took control and arrested the situation, but as soon as I came down from the pulpit, the ‘nonsense’ would bounce back as if it had been waiting for me to be through with my ministration.
The situation had been like that until last year December when it became severe.
I experienced body pains, weakness, dizziness and cold. In fact, if it was that period when I still had the ailment, I wouldn’t have been able to run out the way I did when I was called upon to come out to share this testimony. The last time I went for a test, it was said that my blood sugar level was very high. The brother who conducted the test later brought some drugs for me, but I told him that the question of drugs should be put on hold for the meantime. He said that that was okay but advised that I should avoid eating any starchy food. I told him that I had stopped eating such food items for a very long time, so why had there not been any remarkable improvement in my health? Even during the December Retreat, I couldn’t do anything. I merely stayed at one place. That has remained my situation until we came for this programme.
My wife had always been undertaking the inconveniences of having to come with cooking utensils and foodstuff each time we had a programme in order to prepare the special diet I was placed on since I would not eat the kind of meals served in the course of the meetings. But my healing process started when our pastor was leading us in the prayer session. I saw myself jumping up like an antelope and doing things that I wasn’t able to do before. But when the man of God came up yesterday and asked us to rob our hands on our chests, as I was doing just that, I prayed that he should call out the people with diabetes for prayers. The ways of the Lord are past finding out, for no sooner I made that prayer than he asked any person suffering from the affliction of diabetes to file out. I was the first to get to the stage which gave me an advantage of being among those in the front row. When he got to me and laid his hand on me, the power of God came upon me and I felt a cold sensation.
When I got back to my seat, I began to dance and jubilate like David because I was certain that something great had taken place in my life. At the end of the day, we dispersed to our hostels and brethren, I slept like a baby that night. I did not wake up to urinate until daybreak. Brethren, I can tell you without exaggeration that today I am healed, I am free! Praise the Lord!”