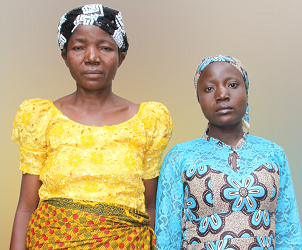 Mrs. Ngozi Herbert of the Watchman Catholic Charismatic Renewal Movement, Uratta, Aba Diocese, is very grateful to God for the great miracle He did in the life of her daughter, Chinemerem. When Chinemerem was born, her genotype was SS. And she began almost immediately to fall sick quite often. Each time she had a health crisis, she was such a pitiable sight to behold. The parents bore this excruciating burden for several years, until recently, when Chinemerem was prayed for and God gloriously healed her, and equally changed her genotype from SS to AA. Full of joy and gratitude, her mother came out to share the amazing testimony of her daughter’s healing at a recent combined fellowship at the Watchman Diocesan Fellowship Centre, Aba:

“I CAME out here today to testify of God’s wondrous work in the life of my daughter (Chinemerem). In September 2012, my daughter fell sick again. The sickness had been troubling her since she was born. It was discovered after her birth that her genotype was SS. You would pity her each time she fell sick, but by the grace of God, this time around, I prayed and told God that the appointed time had come, that He must show that He is God. So, in September, this sickness came and I gave her various drugs, but she did not get better. When I took her to a lab, the lab attendant advised that she should be taken to a hospital. By then, she had become very ill. I had been to the village, and so once I came back, I took her to the hospital. When she was examined, it was discovered that her blood level was 20%. So, the doctor said she would need blood, and I consented. After the blood was transfused, she regained herself. Then, the following day which was a Wednesday, her health once again deteriorated and she became very weak again. So, I asked the doctor to discharge her. He asked whether I wanted her discharged in the state she was. He then said he would not discharge her until her blood level was ascertained. A test was conducted and it was shown that her blood level was 30%. So, they said she needed another blood transfusion. I didn’t have the money for another transfusion so I called my pastor and told him about the situation. He said that he was out of town, but told me to ask the doctor to discharge her so that she could be prayed for. So, I told the doctor to discharge her. It then occurred to me to call our diocesan pastor on the phone. He asked if the child was nearby. I said yes and ran to my daughter who was lying on the bed. Immediately after the diocesan pastor had prayed for her on the phone, they discharged her and we returned home. A week later, I asked my daughter to go to the hospital for a check-up, to know what would further be done about her condition. She went and when she was tested, it was discovered that God has changed her genotype from SS to AA. Praise the Lord!”