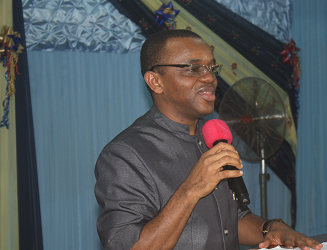 THE 2012 Charismatic Week programme of the Watchman Catholic Charismatic Renewal Movement, Onitsha Diocese, which held from Monday, 8th to Sunday, 14th October 2012 was concluded with a special combined Sunday meeting at the Diocesan Headquarters fellowship centre, No. 9, Sylva Adibe Crescent, Fitzel Estate, Awada. From Monday to Saturday, Watchmen and their visitors gathered at the various district centres in the diocese to listen to the special messages of the programme and receive diverse blessings from God. The theme of the programme was: He Is Greater Than All. Indeed God was present to demonstrate His greatness over adverse situations and problems that plagued the lives of men and women in Onitsha and its environs who had attended the programme. Charismatic Signs was at the combined Sunday meeting where startling testimonies of what God did at the programme were shared amidst ovations and clapping from the jubilant congregation which had gathered at the diocesan headquarters church on that ‘last day of the feast’ to appreciate God and be further blessed by Him.
After the Music Ministry had rendered some edifying numbers, the Onitsha Diocesan Pastor, Modestus Obiakarije, introduced Pastor Protase Opara, the Diocesan Pastor of Lagos Diocese, whom he had invited to give the message of the day. He urged the people to be expectant, assuring them that despite what God had already done during the programme, He was yet going to do more that Sunday. Pastor Opara commenced his message with very striking statements about God’s abilities. As he spoke, prayers rang out from the crowd which had filled the hall and its galleries and spilled into the various canopies arranged outside.
“God is greater than any sickness, any disease … any afflictions! By the time we finish today, you will be bubbling over with good health … God is greater than hardship, He is greater than all limitations, spiritual or physical,” Pastor Opara declared. This attracted a resounding ‘Amen!’ from the already charged congregation.
“As Christians, you are called to live in the supernatural. Those who live in the natural are of this world … irrespective of the situation around you, God is saying that you are a wonder!” he pronounced again.
Pastor Opara went on to share some very startling testimonies, some of them personal, of healings and deliverances by God. This had a tremendous effect on the audience. His message that day, Salient Points About God’s Word, stressed that God’s Word is perfect and has the ability to carry out or bring to pass the information it contains or conveys. According to him, God’s Word is like a seed, it will germinate [inside the person that receives and treasures it] and become a giant. It remains the truth; anything that contradicts God’s Word is a lie! God’s Word is superior to every condition, every creature or situation, because it is God’s Word. God’s Word is a testimony of the integrity of God.
His message dwelt on the power and efficacy of God’s Word and the limitless capacity of God to solve every problem. “See God’s Word as God sees it,” he stressed. He also ministered salvation to those who were yet to be saved. At the end, Pastor Opara made an altar call and several people came out to give their lives to Christ. After leading them to Christ, he prayed for everyone in the meeting, ministering diversely as cases were spotted and tackled. When people who were sure that they had received their miracles in the course of the ministrations were called out to testify, there was a surge forward. Pastor Opara prayed further for them declaring their miracles would be permanent.
After this, Pastor Obiakarije took over and asked the people to rejoice home with their testimonies. He said that it was a season of good things, and that the remaining months of the year would be greatly amazing. “Always rely on God’s Word and apply it in every situation,” he told the people. There was jubilation everywhere. Indeed, God has proved that He is greater than all situations and circumstances.