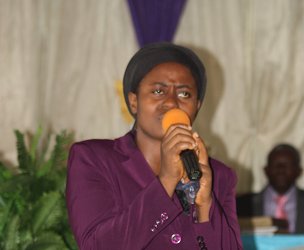 “With my whole heart have I sought thee: O let me not wander from thy commandments.” — Psalm 119:10.

“PRAISE the Lord! Standing before you is Oluchi Augustine from the Agric Parish of the Watchman Catholic Charismatic Renewal Movement, Lagos. I want to testify about how the Almighty God granted me salvation. It happened that when I came to Lagos newly, I wasn’t going to church. I stayed for over a year and did not attend any church. Where I lived, there were about five churches around, but I was not moved to attend any of them.
One day, when my friend and I returned home from work, we were outside the house chatting when some people walked up to us and said they were gospel preachers and that they wanted to preach the Word of God to us. We obliged them and when they were through, they introduced themselves as members of the Watchman Catholic Charismatic Renewal Movement, and encouraged us to visit them on one of their fellowship days. We exchanged telephone numbers and they left. Although, they expected to see us at the church, but we chose not to attend. One day, while I was at the office, I received a text message that said, ‘If you refuse to give your life to Christ, you will die and go to hell!’ I pondered over the message and though it looked like the ordinary thing one was used to hearing, it provoked my emotions and I began to weep. It was like I should become born again that very moment. When I told my friends that I wanted to be born again, they said the following: ‘I beg, go and sleep; you don’t know what you are saying. Do you think that to be born again is like an invitation to come and drink and eat?’ Well, I put it behind me and tried to forget it.
But, when I went to bed that night, it was just like somebody was beside me and telling me that I must be born again. I couldn’t sleep because I was disturbed as it kept ringing in my ears. That day happened to be a Sunday and so when I woke up, I decided to honour the invitation that was earlier extended to me (us) by going to the Watchman church that day. When I finished dressing up, I wanted to apply a make-up but I had a ministration that I should not. But just then, I remembered that there was the word Catholic in the ministry’s name so I concluded that it was a Catholic Church that I was attending, and so I could dress the way I wanted. I argued briefly within myself but I concluded that I heard the word ‘catholic’ mentioned when the preachers introduced their church to us and so I applied my make-up and took off. When I got to the entrance of the church, I looked round and noticed that I was the odd person there and felt ashamed of myself. Though I walked in and sat down, I wasn’t comfortable. When the choristers came up to sing, it was like they knew I was coming and had prepared their songs specially for me.
Even when the choristers left the stage and the pastor came on board, he just brought my case out. I began to weep that day and when I got home after the fellowship, I wept the more. There was nobody I could tell because if I told my friends, they would laugh at me. I had to bear it alone. However, I kept attending fellowships but stopped after a while. This was because most of my dresses were trousers. I can’t remember having any skirt that I could wear to church at that time and that was the reason I stopped. I was worried in my mind because of the messages that were preached. One of the brothers noticed my absence from the fellowship and called to ask what had happened. When I told him my reason, he expressed surprise but at the end we laughed over it. He encouraged me and raised my hope again.
The next time I came, the pastor ministered and I couldn’t hold myself again. It was just like something entered into me. On getting home, after the fellowship, I carried a bag and packed all my trousers into it. When my friends noticed it they asked if I was leaving for somewhere. I didn’t mind them but when they noticed that I had a bottle of kerosene and a match box in my hand, they knew that I was up to something else. They began to tell me that I would soon backslide. They advised me to sell the clothes and use the proceeds to buy skirts instead of burning them. I didn’t mind them but went to the backyard and set them on fire and that was how God delivered me. After that, the next morning, as I was preparing to go to work, I picked up my ear-rings and put them on but it was as if ants were on my ears. I removed the ear-rings and cleaned my ear and wondered where the ants had come from. I cleaned it again and wore it but the same experience happened again. I said to myself that I was getting late so I decided to put them in my bag, hoping to put them on when I got to the office. As I got to the office and tried them on again, the same experience reoccurred and I had a ministration that I should do away with them and that was how the Almighty God delivered me from the things of the world. Praise the Lord!”