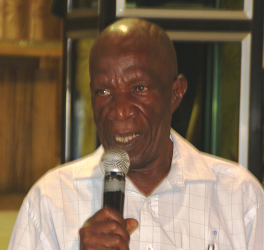 When Edmund Anyanwu from the Osusu Parish of the Watchman Catholic Charismatic Renewal Movement, Aba Diocese, left his house to travel to his village, he never knew that someone would steal his bag at the motor park. But something also happened. As soon the man stole the bag and tried to get away, he was struck with blindness. It was only when he returned the bag, and was prayed for by Anyanwu that he regained his sight. Anyanwu testifies:

“A MIRACLE happened last Friday at the Motor Park here in Aba. I received information about a robbery incident at my house in the village. So, I decided to go to the village to see for myself what had happened. On getting to the park, and boarding a bus, my bag suddenly disappeared. Well, I refused to allow that to worry me. I told myself that since my Bible was inside the bag that there was no cause for alarm. I had also prayed and told God that I was travelling, that He should go with me. So, I remained calm.
But the person that stole my bag had not gone far when he suddenly became blind. He was groping from one stall to another, stumbling over people’s goods and saying to whoever cared to listen that he had suddenly lost his sight. When they asked what happened to him, he informed them that he had just stolen the bag he was holding from one man, and shortly after, he became blind. He told them he would like to return the bag to the owner. So they led him back to the motor park where our vehicle was still loading. When the people inquired to know who owned the bag, I said it was mine. Then the thief confessed to me that he was the one who stole my bag, adding that as soon as he escaped with the bag, he became blind. He began to beg me to have mercy on him and forgive him. He said that even as he was standing there, he could not see anything. He pleaded with me to have pity on him so he could just return to his house. I had a ministration to release him. So I prayed for him and asked God to forgive him because he does not know what he was doing. Instantly, his eyes reopened and he began to see again. This caused a stir at the park.
And as for the armed robbery incident which took me to the village eight of the robbers were already in police net before I got home. I went to the police station and they told me I was such a lucky person. They asked me where I was returning to, and I said it was Aba. They asked me to go that the matter had become their case, not mine. Praise the Lord.”

4 thoughts on “Man Becomes Blind After Robbing A Watchman”