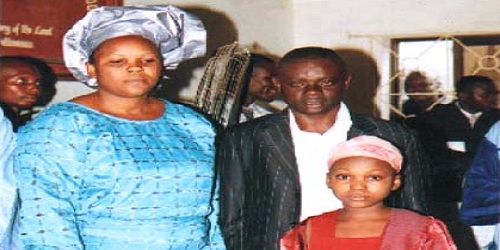 “O sing unto the Lord a new song; for He hath done marvelous things: His right hand, and His holy arm, hath gotten Him the victory” – Psalm 98:1

PRAISE the Lord! My name is Chukwudi Obilite and I worship at the Oshodi Parish of the Watchman Catholic Charismatic Renewal Movement, Lagos. I have shared this testimony before, but I promised then that when I eventually recover my daughter, I will bring her to confirm the authenticity of the testimony.

I want to summarize what I had said earlier, that my daughter had been missing since October 8, 2006. When I returned from the IGMC of that year, on a Saturday night, I advised that one of my younger sisters who was ill should be brought to my house. When she came, I prayed for her.

I noticed the following morning that she was having a running stomach and also vomiting. So, I left my daughter with her to keep her company, while I went to church, after ensuring that she took some medications. But when I returned from the church service, behold, my daughter was no where to be found. She had left the house, missed her way back since we were new in that area, and went too far away from our street in her attempt to trace her way back.   That’s how we lost her.

The search for her began and life became very miserable indeed. Given the kind of society in which we reside, where people look for money by all means, there were fears that something bad may have happened to her. As the search for her endured for months, and yielded no fruit, some fellows began to make some very damaging insinuations against me. They said several uncomplimentary things about me.

Sometimes, when I was led to preach the word of God in the neighbourhood, some people would laugh and make mockery of me, and even go to the extent of alleging that I may have used my daughter for money-making rituals, and that I was using church to cover up my evil. In fact, some attributed my gradual progress in business to some occult influences. I heard all these but kept my peace. And   while in my closet, I would take the matter continually to God in prayer, asking for His intervention.

After the search for her had lasted for about a month and there was no news about her, I went to my pastor and called on him to rise to the occasion. After praying with me, he gave me full assurance from the Lord that my daughter was alive, but added that what he was not sure of was when exactly she would be found. He concluded that it could be a matter of months or years but what he was fully convinced of was that God would bring her back.

Sometime in June last year (2008), during one of our Charismatic Hour fellowships, our pastor informed the congregation that God had said we should be singing His praises. We went into praise-singing and worship and in the course of it, by the word of knowledge, the pastor said that God was going to do something wonderful to a brother. He said the thing would be so great that the brother in question would come out to roll on the floor to appreciate what the Lord had done.

Later in the week after our Charismatic Hour fellowship, my pastor’s wife called my number and informed me of a news item she read in one of the newspapers where my name was mentioned. I hurriedly went for the paper which spoke about my daughter, and that was when the process to recover her began with the authorities. I then traveled to an orphanage in Abeokuta where she was kept and after identifying her, the paper work for her reclamation began.

Interestingly, she was to have been given out for adoption in June 2008, the same month we got hint of her whereabouts, but the Lord worked it out and today she is back home to where she belongs. Praise the Lord!