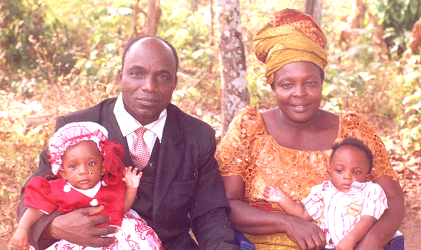 “Jesus said unto him, If thou canst believe, all things are possible to him that believeth.” Mark 9:23

For Mrs. Euphemia Nnamdi of the Watchman Catholic Charismatic Renewal Movement, Ngor Okpala in Owerri Diocese, it was a pleasant case of moving from multiple fibroid to multiple pregnancy. For ten solid years, several factors had stood between her and conception. Doctors had ruled out the possibility of her ever getting pregnant. But when the almighty God intervened recently, all those obstacles gave way and she took in to the amazement of doctors and sundry observers. Today, she is a happy mother of twins – a boy and a girl. And so, recently (March 2013) during a conference of Watchman leaders and ministers at the Rock Chapel, LOGISS, Awo Omamma, she shared her stirring testimony which drew ovations and loud praises to God from the audience: