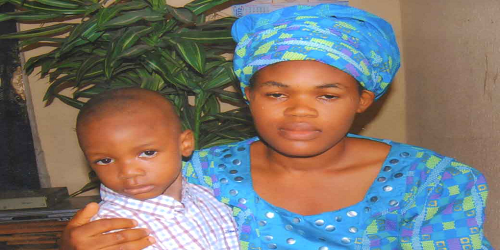 “Who is like unto thee, O Lord, among the gods? who is like thee, glorious in holiness, fearful in praises, doing wonders?” — Ex 15:11

Anurika Obi was full of joy and appreciation to God when she came out to share her testimony at the Watchman Fellowship Centre, Okoko Parish in Lagos. Most people, including doctors, had concluded that her baby who had taken ill a few months after he was born would not survive, but Anurika knew that with God all things were possible. She brought the baby to the Church and the pastor prayed for him. And God started working. Then, after the ministration of the man of God, the General Superintendent of the Watchman, Pastor A.C. Ohanebo, on a particular Sunday at Okoko Parish, God graciously reclaimed the life of the baby, and today, he is doing very well, and has remained a source of immense joy to his parents. Read now the testimony as Mrs. Obi shared it during a church service amidst ovations, clapping and cheers from the jubilant and appreciative Watchmen in Okoko:

“WATCHMEN, praise the Lord! Standing before you is Anurika Obi. I worship at the Watchman Catholic Charismatic Renewal Movement, Okokomaiko Parish, Lagos. My testimony is about my second child. Brethren, just about three months after I had this boy, he took ill.
I took him to about eight different hospitals yet there was no cure. I was troubled because soon, he changed completely from how he looked when he was born. In fact, he was a pitiable sight to behold. At a point, I became ashamed to even carry him out to any place. There was a time I took him to one of the General Hospitals in Lagos but they refused to attend to him saying that he would not survive the next two hours and that I should take him to Massey Children’s Hospital in Lagos Island. I became afraid but I strongly rejected their verdict that my son would die, and decided within me that he would not die. I left the hospital and returned home and my husband asked me why I brought him back home again. I told him that there was no problem. One Wednesday morning, after I had given him a bath, I carried him up and as I looked at him, I had a ministration that I should take him to the church to see the pastor. Without much ado, I brought him to the church here and the pastor took him from me and looked at him. He was suffering from pile and pneumonia and was so sick that merely looking at him, you would think he would die the very next minute. He had lost appetite and whatever food was forced into his mouth, he would vomit it. He wasn’t sleeping either. I was indeed worried that I might eventually lose him.
But the pastor prayed for him, and declared that the healing power of God should touch and heal him. I went back home believing that God had touched him just as the pastor had prayed. With that faith I began to attend fellowship, but because of his persistent cries, I would sit at the back. The stress of having to take him here and there really stretched me. Though I was tired and wearied, I didn’t want to lose him. I continued to pray that God would deliver my baby from the afflictions ailing him. There were suggestions that I should take him to the traditional medicine people but I rejected the idea and told them that I was now a Watchman.
Sometime in March, I had a dream and saw our pastor beckoning on me to come. When I got to him, he asked me to pack all the refuse away from my house. I started sweeping as he directed and at the end, we burnt the refuse. When he was leaving, he urged me to make sure I was in the fellowship the next Sunday. When I woke up, I began to wonder at the dream, though I couldn’t give any meaningful interpretation to it. However, I decided that I must be in the fellowship the next Sunday and behold on that very Sunday, the man of God, the General Superintendent, visited the parish. By the time I arrived at the church, the auditorium was filled to capacity, with some people outside. Fortunately, one of the female ushers secured a seat for me inside the auditorium and when the man of God was praying, I heard a voice saying to me: ‘expose your baby very well, the prayer will touch every person’. I obeyed the voice and unwrapped him and brought him down from my back, and soon after I had done this, I heard a sound in his tummy and wondered if he was going to die in the church.
When we returned home, after the fellowship, I kept him and noticed later that he had fallen asleep. I was baffled because he hadn’t been sleeping, so I continued to observe him. When he had slept for about four hours and had not woken up, I became afraid. I ran to a nurse living nearby and asked her to come and check him for me. She smiled at me and followed me. She examined him with a stethoscope and said that he was fine but that I should prepare pap so that as soon as he woke up, I should feed him. Not long after, he woke up and I fed him. Surprisingly, he finished the whole pap and I was happy, because that meant that the healing process had begun. Gradually, he started to sit on his own and after a while, began to crawl. The next stage was for him to walk which he did effortlessly at the appropriate time. Now, he is over a year old and growing like every normal child. Praise God!”