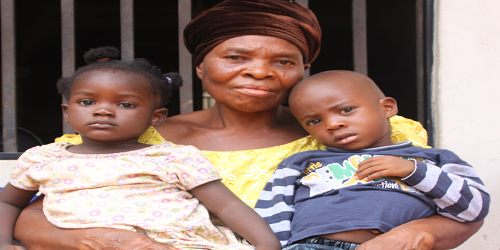 On July 7, 23, Charismatic Signs was in Imo State in search of Mrs. Caroline Chukwuekezie of Awo-Idemili Parish of the Watchman Catholic Charismatic Renewal Movement (Orlu Diocese), whose two grandchildren had been abducted by a criminal couple who had pretended to be nice neighbours to them. These children were sold to some strangers in different Nigerian cities who changed their names and kept them in their custody for several months. We wanted to hear the story directly from Mrs. Chukwuekezie and see and interact with the lovely children (a boy and a girl) who by then had been rescued and brought home through God’s special intervention. The boy, Goodluck Chinaemerem, was two years and five months old while his sister, Promise was four months old when they were stolen. They were taken away on September 16, 2012 and rescued on May 25, 2013 – for nine months!
So, in Orlu on that bright Saturday, after interacting with the little children, Charismatic Signs sat down with Mrs. Chukwuekezie and placed a tape recorder before her to let her say how it all happened. As she talked, the children played around and intermittently interrupted as they tried to joke with her – they appear very fond of their grandmother. It is impossible not to be moved by the joy and vivacity of these two lovely children as they ran around, as if the dizzying story of how they had just passed through the valley of the shadow of death (or as some would put it, how they returned from the land of the dead), had happened in a long forgotten dream. Here now is Mrs. Chukwuekezie’s testimony: